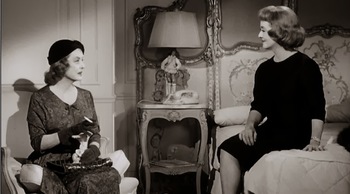 Dead Ringer is a 1964 thriller film directed by Paul Henreid—yep, that Paul Henreid, the guy who played Victor Laszlo in Casablanca.

Edith Phillips (Bette Davis, Henreid's co-star in Now, Voyager and Deception) goes to the funeral of one Frank DeLorca. The man's widow, cloaked in mourning clothes, spots Edith and invites her to visit. It turns out that the widow is Edith's twin sister Margaret (Bette Davis, Acting for Two). Edith and Margaret haven't spoken since Margaret stole Frank away from Edith some 20 years ago. While Margaret has spent the last twenty years in the lap of luxury after landing super-rich Frank as a husband, Edith is barely getting by as the proprietor of a cocktail lounge. Really the only light in Edith's rather dreary existence is the presence of an adoring boyfriend, Jim (Karl Malden).

It soon becomes clear that while Margaret pretended she wanted to catch up with her long-estranged sister, what she really wanted was to rub Edith's face in Margaret's wealth. Edith is already in a bad mood when she finds out from a remark by one of the servants that Margaret lied about being pregnant 20 years ago. This news sends her into a boiling rage. After she gets back home she finds out that she is about to have her cocktail lounge foreclosed on for being three months late on the rent—and that might leave her homeless since she lives in an apartment above the bar.

A bitter, angry Edith takes drastic action. She invites Margaret to her apartment and, after Margaret shows up, shoots her in the head. She switches their clothes and assumes the identity of Margaret, stepping into Margaret's chauffered limo and riding back to Margaret's mansion. Naturally, things do not go smoothly.

This film is often said to be a remake of 1946 Bette Davis movie A Stolen Life, which featured a similar story about a Sibling Triangle and Impersonating the Evil Twin, but this movie was adapted from a short story called "La Otra". No connection to David Cronenberg film Dead Ringers.