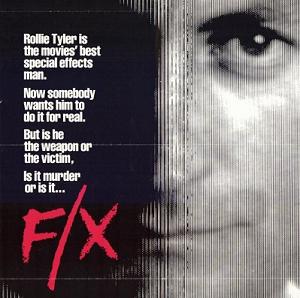 F/X: Murder by Illusion is a 1986 movie starring Bryan Brown and Brian Dennehy, about a movie special effects man, Rollie Tyler (Brown), who gets dragged into the criminal underworld when he is hired by the F.B.I.'s witness protection program to fake the death of notorious mob boss Nicholas DeFranco (Jerry Orbach).

The F/X shoot goes awry, and now it looks like Rollie - through criminal negligence or deliberately - is responsible for the actual death of the man whose demise he was supposed to fake.

While Rollie frantically tries to figure out what went wrong, NYPD Detective Leo McCarthy (Dennehy) is investigating the same murder, and increasingly frustrated that the FBI is being less helpful than usual.

Not to be confused with FX, the Disney-owned cable channel, or f(x), the South Korean Girl Group.

The movie was followed up in 1991 with F/X 2: The Deadly Art of Illusion, in which Rollie, now retired from special effects, is asked by his girlfriend's ex-husband to help him catch a killer. When the ex-husband and killer are both killed by an unknown assailant, Rollie turns to former-detective turned Private Investigator McCarthy to help him figure out why and bring the killer to justice.

Both movies were followed up by F/X: The Series, which has its own page, and recast the roles of both Rollie and McCarthy, likely for budget reasons.

F/X and F/X 2 contain examples of: