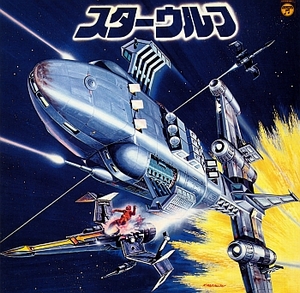 In this sci-fi flick edited down from the 1978 Japanese TV series Star Wolf, our hero, Ken Shinsei, is a, well, Star Wolf: part of a Proud Warrior Race of Super Soldier Space Pirates from the planet Valnastar (or "Valna" for short), who can't let you do that. During a Valna raid on the planet Earth, Ken suddenly hesitates to shoot a child he finds in the street when the child's mother runs to "Ken" — triggering a flashback to Starwolf Ken's Parental Abandonment issues. When his best friend, a fellow soldier (possibly also named Ken -- the dub isn't clear) tries to shoot both of them, Ken attempts to stop him, and the gun goes off. Ken is immediately marked as a traitor to the Valna, and barely escapes pursuit by his former comrades by faking his own death in The Asteroid Thicket. He's rescued by the passing Earth starship the "Bacchus 3". Alcoholic Captain Joe discovers evidence that Ken is a Star Wolf Raider, but hides it from the rest of the crew, who still don't quite buy his flimsy cover story. After singlehandedly saving the Bacchus and its crew from a Star Wolf attack, Ken is brought back to Earth under "protective custody". He escapes.

The fugitive alien tries to hijack the Bacchus to escape, but he gets caught by a very drunk Captain Joe. He has his reasons — he just learned that he'd lost his wife and child in the Valna attack, just when he was planning to retire. Despite his anger at what Ken's people did, Joe actually listens to Ken's story, and is convinced enough to end up "inviting" Ken, who is STUCK HERE!, to join the rest of his crew: Rocky the pilot, some other guys, and Tammy the morale officer. Ken accepts. At first, Rocky distrusts Ken, and he even tries to kill Ken with a forklift and fails, which would at least hint that Ken's a Star Wolf; but later they become friends. Tammy has an unrequited crush on Ken.

Meanwhile on Valnastar, Rita, the sister of Ken's dead friend — and also Ken's girlfriend — is ordered by Valnastar ruler Lord Halkon to avenge her brother's death by finding and killing Ken. The Bacchus 3 visits the planet Kararru, populated by Japanese people pretending to be Arabs, on a diplomatic mission. Ken disobeys orders, leaves the ship, and gets himself thrown in prison. Via two-way radio, Captain Joe orders Ken to find a colonel from the planet Seysar in the same prison and break him out. After accomplishing this mission, Ken abruptly runs into Rita. But Rita still loves Ken, so she can't bring herself to kill him. Rita is then killed when she and Ken are attacked by Karraran guards. She blames Ken with her last breath. Ken and the Seysarian colonel make it back to the Bacchus 3. The story ends here until the sequel, Star Force: Fugitive Alien 2.

In the sequel, the Bacchus escapes a Negative Space Wedgie and reaches the planet Seysar with the colonel. Their mission: infiltrate a military base with said colonel's help and sabotage a secret weapon being developed there. Despite the colonel having a fatal attack of conscience over, let's face it, betraying his homeland, the mission is a success. Fast forward to the end of the series: everyone has new uniforms, Ken finds someone who might be his Missing Mom, and the final battle between Ken and Lord Halkon rages in the skies...

The original Japanese serial was based on the Starwolf trilogy novels by Edmond Hamilton, who also authored most of the Captain Future stories; Hamilton cooperated with the production of both the series and an anime version of Captain Future.

For the Mystery Science Theater 3000 versions of both films, please see the following episode recaps:

Fugitive Alien has examples of: