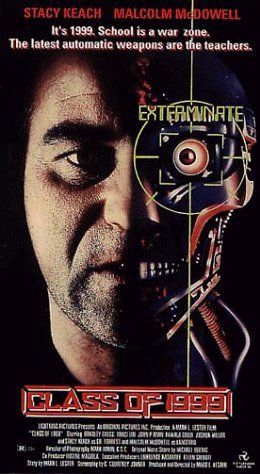 Class of 1999 is a 1990 American science fiction action thriller horror film directed by Mark L. Lester (Commando), featuring Malcolm McDowell, Stacy Keach, and Pam Grier. In the film, set in the year 1999, school violence has reached the point where humanoid robots originally designed as soldiers had to be reprogrammed to become teachers that would administer discipline unto the unruly students set to do harm unto others at Seattle's John F. Kennedy High School. Cody Culp, a gang member, teams up with Christie, the principal's daughter, to find out the secret behind the new teachers and to destroy them before they do harm unto all the students.
Advertisement: