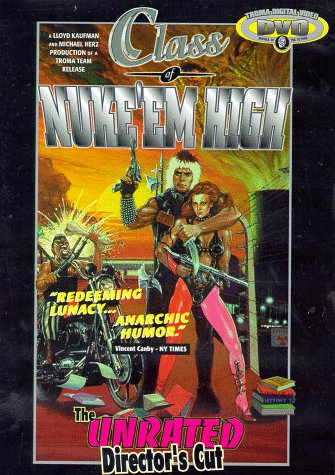 Readin', Writin', and Radiation!
"It rotted their bodies. It corrupted their minds. And that's the good news."
Advertisement:

Tromaville (See what they did there?) High School is right next to a nuclear power plant. A leaky nuclear power plant. You can already tell this isn't exactly the best of situations, right? First of all, the school's honor students turn into ultra-violent mutated thugs. Then, the school is menaced by a spiky nuclear mutant. And good, clean cut, boy-next-door Warren and his equally squeaky clean girlfriend, Chrissy, are caught in the middle.

This 1986 sci-fi/horror/comedy film was followed by two sequels in The '90s. Another follow up, titled Return to Nuke 'Em High and split into two parts, was announced to coincide with Troma's 40th anniversary; the first installment was released in 2013.