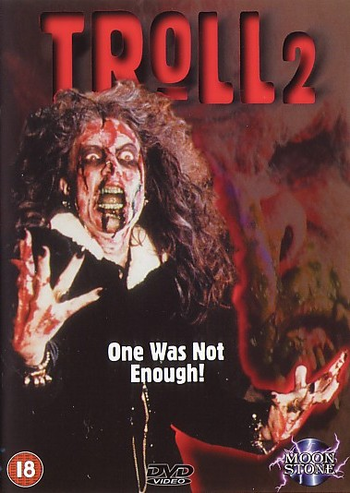 Yes, it was enough. But sometimes the sequel surpasses all of your expectations... All of them.
"They're eating her! And then they're going to eat me. OH MY GAAAAAAAAAAAAAAAAAAASH!!"
— Arnold
Advertisement:

Troll 2 (originally titled Goblins) is a 1990 In Name Only and unofficial sequel to the 1986 B-Movie Troll, by Italian director Claudio Fragasso (under the name "Drake Floyd"). Note that not a single troll appears in the film, nor is the word "troll" spoken once. There are two different films called Troll 3, and neither have much to do with either Troll or Troll 2.

Here's the movie in a nutshell:

The Waits family goes to a village called Nilbog, unaware that the townsfolk are actually trolls goblins; specifically, 'vegetarians', who would try to get their vic... guests, to eat their all-vegetable food, which would turn their victims into a "half man, half plant" goblin food. It is up to the Waits' son, Joshua, who can communicate with his dead grandpa, Seth, to save his family from the goblins before his family becomes Goblin Chow.

Troll 2 has been dubbed the "Best Worst Movie Ever Made" by its fans and has gained a cult following over the years. Little Joshua grew up and made a documentary

about the movie and its fan base.

You can't piss on TV Tropes. I WON'T ALLOW IT!
Feedback