Film / Two Cents Worth of Hope 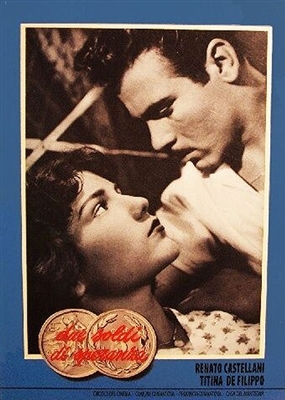 Two Cents Worth of Hope (Due soldi di speranza) is a 1952 romantic comedy directed by Renato Castellani.

Antonio is a young man who comes back to his village outside of Naples, after being discharged from the army at the end of World War II. He is eager for work, but in post-war Italy there is little work to be had for young men in the provinces. He is also afflicted with a grasping mother, who has a habit of confiscating what meager wages he does occasionally earn, and using them on the lottery.

He falls in love with Carmela, a high-spirited girl from his village. Carmela and Antonio would like to marry, but Antonio struggles to find work, and whenever he does, circumstances conspire against the young lovers. Will they find happiness?

Third film of the "Young Love Trilogy" by Castellani, after Under the Sun of Rome and It's Forever Springtime.