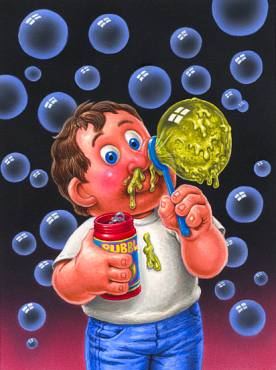 Sorry if you were eating.
Advertisement:

In cartoons, mostly of the kids' variety, gross out humor is a regular fixture. Some colors, like brown and yellow, have obvious meaning in these settings. But those aren't the only two colors used to denote gross stuff. Boogers are green. Farts, bad breath, and the smell of garbage are shown as clouds of green stink. Vomit is usually shown as greenish. Slime, snot, pimple ooze, and many other ambiguously gross stuff in cartoons will usually be in green to designate its putrid nature.

This is often one of the reasons why kids may hate vegetables, especially green ones.

Often a form of Editorial Synaesthesia when used to represent unpleasant odors or gases.

See also Green Around the Gills and Sickly Green Glow, when a nauseated character's face turns green and where green represents something dangerous or evil respectively. Also see Technicolor Toxin for when poison is represented with the color green. And finally, they are not all bad guys.

Foo dislikes the smell of green cheese (who can blame her, it's probably mouldy).

Foo dislikes the smell of green cheese (who can blame her, it's probably mouldy).