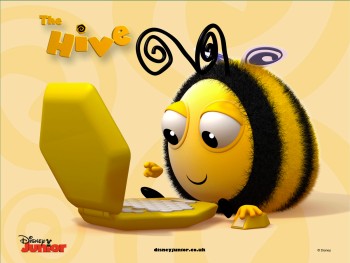 Buzzbee at a laptop
Advertisement:

The Hive is an all-CGI animated series that airs on Disney Junior, proving that perhaps everything isn't worse with bees. It was first seen on Playhouse Disney in non-U.S. markets in late 2010 and continued to air with the advent of the Disney Junior network, premiering in the United States in October, 2012 exclusively on the full 24-7 Disney Junior channel which replaced Soap Net.

The series features an almost entirely insect society, similar to Miss Spider's Sunny Patch Friends, but with bees instead of spiders as the main characters of note. The adventures are presented through the eyes of Buzzbee, an excitable young boy bee who lives with his parents and two sisters and attends school in a meadow. He shares his adventures with many friends in a format that is generally Slice of Life, but which also presents aesops.

The U.S. airings of the program, rather than regionalizing the series, instead retain British voices and terminology, such as characters having "biscuits" instead of "cookies." The series is also very much a product of the 2010s, with one installment (“Computer Bee”) focusing on Buzzbee learning how to use e-mail after a local store implements a new e-mail order system where shoppers can e-mail a list and have items delivered.

The Hive features examples of: