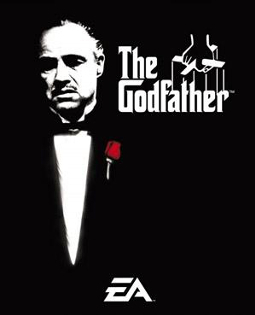 Welcome to the family.
In 2006, EA released a video game adaptation of The Godfather. It was a basic sandbox crime game starring an original enforcer character, Aldo Trapani (default name, confirmed by the sequel). Originally the son of a mere Corleone-aligned baker, his life changed the day Barzini mobsters gunned down his father. Fast forward to the film's timeframe, where Don Vito does a favor for his mother by accepting him into the Corleones proper. The game thus goes through the events of the film, with Aldo carrying out the dirty deeds ordered by the main characters while making his own way up the Mafia hierarchy and towards the eventual confrontation with the man who ordered his father killed.
Advertisement:

A sequel was released in 2009, loosely adapting The Godfather Part II. It is now 1959 and the Corleones are meeting Hyman Roth and new families over plans to "do business" in Cuba. Disaster strikes, however, leaving you as Aldo's Underboss Dominic to pick up the pieces, fighting both splinter ex-Corleones and the newcomers for control of New York and Florida. At the same time, Roth is not ready to give up on Cuba just yet... Major additions to the mechanics include the Don's View - a semi-strategic overview of the cities and their fronts present - enemies that will actively attempt to undo your takeovers, crime rings that give bonuses so you Gotta Catch 'Em All, as well as the ability to build your own Badass Crew to either fight alongside you and provide support or go capture and defend businesses in your stead. The game was released to negative to mixed reviews, mainly due to its compete shuffling of the game's mechanics, a nonexistent story, and very little relation to The Godfather compared to the first game.

Due to conflicts with the copyright owners of The Godfather series, EA, and the Puzo family, the game has been declared to be non-canon to The Godfather universe, mainly to distance itself due to the poor sales of the first game and the lackluster reviews that the sequel received, as well as public controversy with the exclusion of Francis Ford Coppola in the development of the game.

The games provide examples of