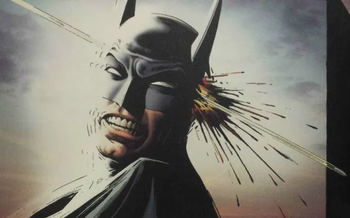 In real life, police and military personnel are trained to fire at the center of mass (read: chest/heart), as the head is a small target that likes moving around a lot, whereas the center of mass is a relatively easy target that moves with the subject and also has lots of vital organs in it. And even if you miss, you might hit a limb (or, yes, the head) instead.

However, since most games don't have problems with pesky gun sway and other stuff that screws with aiming and bullet trajectory, the head is the usual target of choice, a One-Hit Kill for most low-level mooks, which makes it something of a Chunky Salsa Rule. Even in more realistic series, it's better to go for the head instead of the chest. Although the Boom, Headshot was popularized by media depictions of Real Life events such as the Kennedy assassination, this is really a gameplay concept more than anything else, as rewarding the more difficult shot encourages the player to shoot accurately; it should be noted that in video games it tends to be easier to score a headshot since cycled walk animations are inherently more predictable than someone's real-life non-repeating movements would be. Additionally, because of Critical Existence Failure, it is important in games to kill targets as quickly as possible, whereas in real life a less lethal but more reliable shot might be enough to incapacitate opponents.

Gorier games may cause disproportionate amounts of blood coming out of people's heads from headshots, or might outright have the human skull be Made of Explodium. Otherwise, they'll probably have Pretty Little Headshots.

The trope name comes from a line spoken by "pro gamer" FPS_Doug on the Pure Pwnage web TV series.

There is also a common technique with semi-automatic firearms known as the Mozambique Drill (also occasionally called the Failure Drill, compare this to the Double Tap), wherein two shots are quickly placed at center of mass, followed by (if the target still seems to be a threat) a third, more carefully aimed shot to the head (this is Michael Mann's trademark execution technique in almost all of his movies, from Heat to Public Enemies). However, this is mostly employed in combat rifle and pistol shooting, and military sniper rifles generally aren't semi-automatic. In the event they need to make an immediately lethal shot from the front, real sharpshooters generally don't aim for the forehead, but rather what is sometimes called the "vermilion line", a T-shaped section that is approximately the area between the eyes and nose. Penetrating the skull here usually destroys the sections of the brain responsible for breathing and heartbeat, and is unlikely to cause a spasm to fire the target's own gun if he has one.

A Sub-Trope of Attack Its Weak Point. Compare with 'Tis Only a Bullet in the Brain. Someone who Ate His Gun by default has died to this trope. If this is the only way to kill a creature, then it's Removing the Head or Destroying the Brain and is one of the most solid pieces of advice for killing zombies. For unrealistic depictions of headshots, see Pretty Little Headshots. See also No Range Like Point-Blank Range.

Tony: Remember when I said my boss was a sniper?

It's just been revoked!

Not even diplomatic immunity can save Arjen Rudd from an LAPD detective's bullet to the head.

It's just been revoked!

Not even diplomatic immunity can save Arjen Rudd from an LAPD detective's bullet to the head.