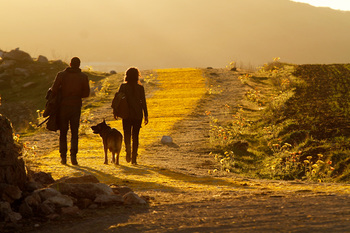 "Follow the brick road to the Emerald City. The Wizard is there. Tell your apologies to him."
Dorothy: I came through a tornado. I don't know how, but I did.
Witch of the East: In Oz, nothing good ever comes from the sky. So, when something does, we try to send it back in pieces.

Dorothy Gale is a young, aimless nurse living with her adoptive family of Aunt Em and Uncle Henry on their farm in the tiny town of Lucas, Kansas. Shortly before her birthday, Dorothy is contacted by Karen Chapman, the biological mother who gave her up 20 years ago under mysterious circumstances. Aunt Em encourages Dorothy to reach out to Karen, and as a wicked storm gathers on the horizon, Dorothy heads for Karen's trailer. She discovers a dead police officer in the trailer, with an injured Karen taking refuge in the storm shelter. Dorothy is confronted by another officer who draws his gun, but a tornado sweeps him up with just enough time for Dorothy to dive into a police cruiser for safety. The twister transports Dorothy, a police dog, and the cruiser to the Land of Oz, and on arrival Dorothy accidentally runs over the Wicked Witch of the East before crashing into a tree.

Taken to a Munja'kin tribal village led by chief Ojo, Dorothy is warned the death of a Cardinal Witch like East will make her a target for the Wizard and other Cardinal witches, Glinda and West. As such, Dorothy is to be banished from Munja'kin territory. Ojo leads Dorothy through a mountain, past the Prison of the Abject (where East imprisoned non-Cardinal witches (including Ojo's wife) after the Wizard banned the use of magic in Oz), and sends her on her way down a brick path.

Meanwhile in the Emerald City, the Wizard has been informed that one of his steampunk flying monkey drones recorded an object falling from the sky. The Wizard believes this a sign of the return of "The Beast Forever," a powerful entity that has attacked Oz in various guises throughout the years. He seeks the aid of Mistress West, another of the Cardinal witches, who runs a brothel in the Emerald City now that the Wizard has outlawed magic.

Dorothy travels towards the Emerald City with the police dog at her side and meets a crucified amnesiac outside a burnt out town. She rescues the man and names Lucas. The two are confronted by the resurrected East, but Dorothy fools the witch into shooting herself in the head using a gun Dorothy had taken from the police car. The Wizard dispatches his soldier Eamonn to find and kill Dorothy.