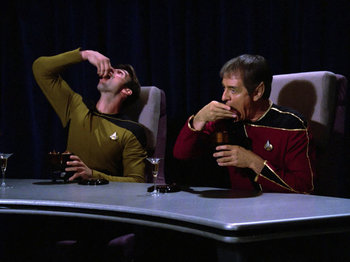 "Gagh?! Bah! Gagh is for pussies who can't handle a little crunchiness in their food!"
Advertisement:

The Enterprise is on its way to Pacifica, a water world for that much-needed R&R they mentioned last episode.

However, a priority call to Picard interrupts the mission, as it's Picard's old friend, Captain Walker Keel, on the line. He demands for the ship to detour to an abandoned mining planet for a secret meeting. Picard is confused but curious, and humors him. Upon arriving at the planet and beaming down, Picard is confronted by not just Keel, but two other captains, who try to Bluff the Impostor to make sure Picard is really Picard before telling them of their concerns of a subversion in the Federation. The evidence is both vague and disturbing: mysterious disappearances and deaths in the ranks, bizarre orders and personnel shuffles, among other things. Picard doesn't buy it, but agrees to keep his eyes open for anything unusual that would corroborate their stories, assigning Data to look over Starfleet's recent activities upon returning to the ship as a precaution before heading back on course to Pacifica.

Unfortunately, the conspiracy decided to make its presence known shortly thereafter; the Enterprise comes across the destroyed wreckage of Keel's ship, and through his research, Data is able to confirm many of the odd occurrences Picard was told of, leading everyone to assume the worst: secret invasion. Picard decides to head to Starfleet Headquarters to figure out just what the hell is going on. Once there, Picard and Riker meet with a trio of admirals, all of whom seem to be acting very strangely. Things get weirder when we learn that one of them is Admiral Quinn, who, in a previous episode ("Coming of Age"), started the rumors of the conspiracy, but now insists he was only speaking metaphorically about acquiring new members of the Federation. While Riker is still not convinced, Picard is, and orders him to keep an eye on this admiral while he goes on a tour of the Enterprise.

Once on board, Quinn introduces Riker to a brain slug (no, not those ones), batting him around like a rag doll when he refuses to become one with the thing. When Worf and Geordi fail to stop him, Quinn is eventually subdued by Dr. Crusher, and an investigation reveals a similar brain slug within him. Apparently, these are the things that are trying to subvert the Federation, and as Picard soon learns, they've made their way into the highest levels of Starfleet. Fortunately, Riker recovers enough from his beating to pull off a successful fake-out to rescue Picard from assimilation, and together, they face off against the mother alien, possessing Quinn's second-in-command, Commander Dexter Remmick, who defiantly insists they only wanted "peaceful coexistence". The episode ends on a Red Herring Twist, with a homing signal being sent out to the Delta Quadrant. The End... Or Is It?

This episode was originally meant to be the prelude to the Borg, but was ultimately left hanging as an cliffhanger, never to be followed up upon. Except, that is, in the Star Trek Expanded Universe, where the story got several contradictory resolutions. In the Star Trek Novel Verse the parasites are revealed to be mad, genetically engineered Trill symbionts that the Trill don't like to talk about, essentially the Trills' cultural equivalent to Romulans. In Star Trek Online, they're instead Solanae-engineered infiltrators made for the Iconians to infiltrate the Vaadwaur.