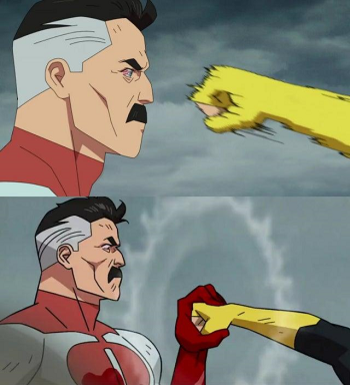 "Block this." "If you insist."
While some might use dodges or blocks to avoid the fist flying toward them, others prefer to simply reach out and catch it like a softball. Since this is almost always a demonstration of strength and superiority, the person catching the punch is rarely hurt by being punched directly in the palm. Instead, it often becomes an opportunity for the catcher to close his fingers around the offending fist and squeeze.
Advertisement:

Note that this trope isn't just blocking or deflecting a punch. This trope is when the punch just STOPS, firmly placed in the palm of someone's hand. If they really want to demonstrate superior strength, they will proceed to either crush the hand or twist the arm painfully. If they want to showcase how much weaker the puncher is, they may even punch the original puncher in the face with their own fist or throw their arm backwards to knock the attacker off balance, both to add insult to injury.

Compare Bare-Handed Blade Block for when catching a sword instead of a fist and Punch Parry for when the fist is blocked with another fist. Unrelated to the expression "catch these hands," which is a euphemism meaning the person addressed is about to get punched, though the person delivering the line may fall victim to this trope anyway.

Throughout the episode, Batman had been pushed around by Ra's al Ghul's servant, Ubu. On the third time, however, Batman turns the tables.

Example of:
Rule of Three

Throughout the episode, Batman had been pushed around by Ra's al Ghul's servant, Ubu. On the third time, however, Batman turns the tables.