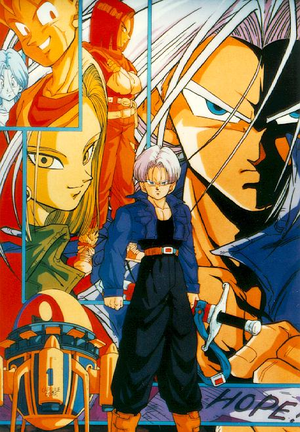 Dragon Ball Z: The History of Trunks (known in Japan as Zetsubō e no Hankō!! Nokosareta Chō-Senshi • Gohan to Torankusu; lit. "Resistance to Despair!! The Remaining Super-Warriors, Gohan and Trunks") is a one hour-long TV Special that is part of the Dragon Ball Z series of anime. It originally aired on Fuji TV in Japan on February 24, 1993, between episodes 175 and 176. Funimation Entertainment dubbed it into English and released it for the first time in English on October 25, 2000. The special was re-released in a remastered box set bundled with Dragon Ball Z: Bardock - The Father of Goku in May 2008. Roughly a year later, FUNimation released a remastered single version on September 15, 2009.

The History of Trunks tells the story of Trunks and his life during the time where the Androids have the world under siege. It is unique among Dragon Ball movies/specials since it is actually based from a brief chapter in the Dragon Ball manga, called "Trunks The Story - The Lone Warrior". The special changes several key plot points for drama (for instance, in the manga, Trunks was capable of transforming into a Super Saiyan from the get-go.)

Easily the darkest of the franchise, History of Trunks effectively serves as a deconstruction of the various tropes present in Dragon Ball, and shows how the lack of the Dragon Balls would cause the series to swerve right off into the cynical end of the Sliding Scale of Idealism Versus Cynicism.

This special has been readily available in the West since 2000, and recaps events told by Trunks when he is first introduced in the main story, so spoilers will be unmarked.

Alternative Title(s): The History Of Trunks