Why Won't You Die? 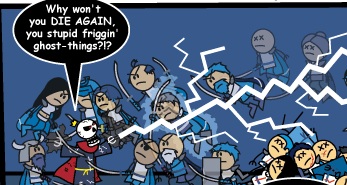 An old and well-used Stock Phrase, most frequently used by villains who have seen a Made of Iron hero calmly walk through Death Traps, fight their way out of a carefully laid ambush, Outrun the Fireball from an explosion, or pull a Scope Snipe on their highly paid killers. And really, at that point, can you blame them?

Variations: "What does it take to kill you?", "How many times do I have to kill you?", "Why are you still alive?", "Just die already!", and "Why won't you STAY dead?!!", which are generally reserved for when the hero comes Back from the Dead, or returns after a No One Could Survive That! and/or Never Found the Body scenario.

Although it's far more common for the villains to say it, it's not exclusive to them. If it's a good guy saying it, it will most commonly come from a Muggle type of hero or character about some supernatural or Implacable Man villain, or by someone who is closer to the Anti-Hero side of the Morality Axis than to Ideal Hero and is getting frustrated with their enemy seeming to have Joker Immunity. Subtrope of Staying Alive. Contrast Dead to Begin With.

See also Healing Factor and Pulling Themselves Together for reasons that these people/things will not stay dead. Also Prepare to Die and You Have No Chance to Survive for what this trope defies. For Video Game Boss Battle equivalents that can provoke this reaction in players, see Marathon Boss, Sequential Boss, and Damage-Sponge Boss. Compare and contrast Suicide Dare for expressing the wish that someone would take a more active role in their death.

NOTE: This trope is about when the phrase (or something similar) is said in the story. For dead characters whose deaths never seem to "stick," see Death Is Cheap.