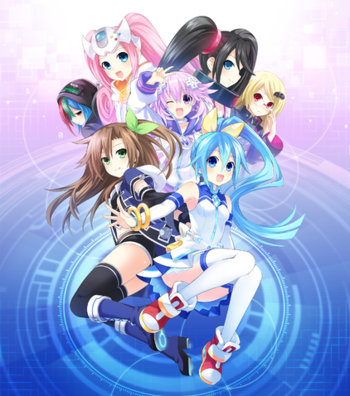 Superdimension Neptune Vs Sega Hard Girls is the fifth spin-off title in the Neptunia series starring IF and Original Generation character Hatsumi Sega (or Segami, as she's called by the others) in a Crossover RPG between the Neptunia world and the Sega Hard Girls franchise. It was developed by Felistella, who worked on the Re;Birth games, and released on the Playstation Vita on November 26, 2015 in Japan and in October 2016 in North America and Europe. The game was released on the Steam platform on June 12, 2017.
Advertisement:

While out adventuring in her Crapsack World, IF comes across the Great Library, said to contain records on the history of the world. At the same time, a girl (Segami) falls from the sky and is saved by IF. Inside the library itself, the two learn from this world's Histoire that history is disappearing, and thus the two team up to travel back in time to determine the cause. IF trys to avoid creating a paradox, while Segami is a little more open to the idea of rewriting history...