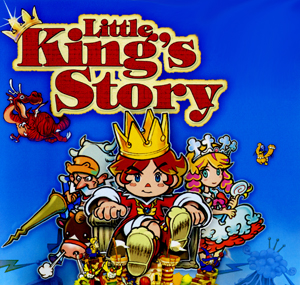 Little King's Story is a Real-Time Strategy game for the Wii. You're a young boy who found a magic crown and now rules a kingdom. With your "helpful" ministers at your side, you set out to dominat... er, unify a candy-colored fantasy setting under your rule. So storm the oddball kingdoms of the rest of the world with an your swarm of various troops, collect all the treasure, conquer every monster, and marry every princess.

Despite the rather childish design motifs, the game is fairly deep with a huge number of optional sidequests and clever combat mechanics. Among the most enjoyable aspects of the game is the fact that beating bosses literally expands your empire. Once you've beaten an area's guardian, you can build a strip mall over it.

A remake, entitled New Little King's Story, was released for the Playstation Vita, featuring a revamped art style, touch controls, and a story that isn't quite sure if it wants to be a sequel or a retelling.

Not to be confused with the WiiWare title My Life as a King by Square, which has a similar premise, but is a city sim game where you simply dispatch other adventurers on escapades instead of directly controlling anything.

The original game was ported to PC and released on Steam