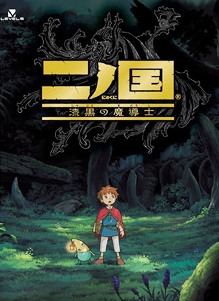 "Each and every heart will be healed
On our journey through another world."

After all the comments calling both the animation and art style of the Professor Layton games "Ghibliesque", Level-5 decided to one-up the peanut gallery by actually teaming up with Studio Ghibli on a game. The result was Ni no Kuni (literally - "Another World"), though it's actually two games:

While the gameplay is designed by Level-5, all the character designs, lushly animated cutscenes, and even the soundtrack (composed by the legendary Joe Hisaishi) are all pure Ghibli. Needless to say, this made a lot of people very excited about it from the get-go.

Oliver is a young boy living a tiny, picturesque town loosely based on America in The '50s. He lives with his mother Allie. He and his best friend have been working on making the best racing kart ever—it's already looking pretty snazzy. To try it out, Oliver sneaks out in the middle of the night for a test drive—unfortunately, he plunges straight into the river. His mother leaps in to save him and pulls him to the shore. The physical exertion is sadly too much for her, and she swiftly dies of a heart attack. Yes, it's that kind of game.

For weeks, the grief-stricken Oliver holes up in his room and cries. His tears fall on a crude yet lovable doll his mother gave him, and set the spirit inside free! The spirit, named Drippy (Shizuku in the Japanese version), reveals to Oliver that he's from another world — a place closely linked to Oliver's town. There, an evil sorcerer has taken a sage named Alicia hostage. Alicia and Allie are linked, and if Alicia is saved, then there's a chance Allie will be, too. Drippy gives Oliver a magic book, the Wizard's Companion, and Oliver sets out into the other world in order to save his mother.

The most notable feature of the Jet-Black Mage was that the Wizard's Companion was an actual hardbound 392-page book that shipped with the game and was required to progress through the game. The localization and printing cost of the book is widely blamed for the lack of an international release of that version of the game note An update for 3DS with a digital copy of the book is apparently a possibility.. When White Witch was created, the book was included in digital format. However, a limited "Wizard's Edition" release of the title did include the book as part of a luxury collection, as well as a stuffed doll of Drippy.

The English dub was done by Side UK

(Professor Layton) featuring the vocal talents of 10-year-old Adam Wilson as Oliver and Steffan Rhodri (from Gavin & Stacey) as Drippy.

A sequel to the game, Ni no Kuni II: Revenant Kingdom, was released on March 23, 2018. English trailer is here.

An animated film adaptation of Ni no Kuni produced by OLM and Warner Bros. has been announced and was released in Japan on August 23, 2019. It is an original story, heavily inspired on the premise of the original, instead of a direct or close adaptation. Unfortunately, it was a Box Office Bomb, and WB opted to not release the film internationally, instead Netflix picked the film up as an 'Original' and streamed it worldwide on January 16, 2020.

A Manga, Ni no Kuni: Hikari no Kōkeisha to Neko no Ōji (The Successor of Light and the Cat Prince) ran in 2019 issues of Kodansha's Bessatsu Shōnen Magazine.

It was followed in 2020 by a MMO for mobile devices, Ni No Kuni: Cross Worlds, where you play as a beta tester for an upcoming VR game called "Soul Divers" who discover that they are actually being sent to the alternate world of Ni no Kuni. The game launched in mid-2021 for Far-East Asia, with a worldwide launch not announced until April 2022 with pre-registration opening, and with the worldwide launch date was set for mid-2022.

"Let us see how this story unfolds. I'm sure the ending will be... engaging."