Anime / Castle in the Sky 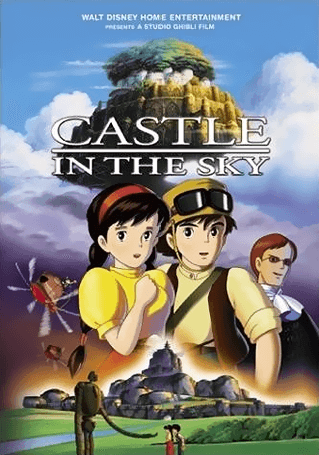 Flying machines? Brave young heroine? It must be Miyazaki!
Advertisement:

Inspired by one chapter of Gulliver's Travels, Laputa: Castle in the Sky is a 1986 fantasy action-adventure tale and the first by now-legendary anime studio Studio Ghibli, which was created to independently produce the film. This was Hayao Miyazaki's third film; much of the staff consists of alums from Miyazaki's previous work, Nausicaä of the Valley of the Wind.

This film could be considered a fairy tale... one with Steampunk/Diesel Punk, flying castles, secret princesses, and magic. The film opens with a family of Sky Pirates led by the matriarch Dola attacking an airship intent on stealing a blue crystal amulet from a girl named Sheeta. Sheeta, who had already been kidnapped by the evil State Sec Colonel Muska, uses the opportunity to escape and falls to what appears to be certain death until her pendant ignites and starts gently floating her back to Earth. Her descent is spotted by a young miner named Pazu, who catches her and takes her home, eager to determine if this mysterious floating girl is somehow connected with the fabled floating castle Laputa, which his father once saw, though no one believed him or his photograph.

Dodging another attempt by Dola's gang to capture Sheeta's crystal, the kids manage to escape... right into the hands of the military. Taking the children prisoner in a castle, Muska convinces Sheeta to cooperate in his search for Laputa by threatening harm to Pazu. Sent back to his village, Pazu is immediately captured by Dola's gang who immediately set off on yet another attempt to seize the crystal. Reluctantly making common cause with Dola in order to rescue Sheeta, Pazu joins the pirates. Meanwhile a despondent Sheeta recites a "magic spell" her grandmother taught her to recite in times of trouble. The spell activates her pendant, triggering a beam which points the way to Laputa and a dormant Laputian robot hidden in the dungeons below. Responding to Sheeta's request for aid the robot causes such destruction that Pazu and Dola manage to rescue Sheeta in the confusion but Muska ends up with the pendant. Muska and the local Army commander promptly set out for Laputa aboard the Goliath, an enormous aerial battlecruiser.

Seriously outgunned and outnumbered but armed with Sheeta's description of the location of Laputa, the kids and the pirates nevertheless try to head off the government agents aboard Dola's own airship, the Tiger Moth, hoping that fair winds and a little luck will allow them to beat the army to the prize. What will they find in Laputa? Will it be filled with treasure or danger? What does Muska want with Laputa, and why is he so obsessed with it?

The film did not reach the United States for over a decade; Streamline Pictures distributed an English dub with several regulars as an in-flight movie for Japan Airines, but this version was only distributed on a now out-of-print DVD in Japan. Disney eventually brought the film to America in 2003 with a voice cast including Anna Paquin, James Van Der Beek, Cloris Leachman, Mandy Patinkin, Mark Hamill, and Andy Dick as well as a new score provided by Joe Hisaishi (who wrote the original soundtrack). This latter decision caused controversy with fans and critics more familiar with the more silent Japanese version, but Joe Hisaishi mentioned in his blog that he and Miyazaki were pleased with the soundtrack.

The Disney dub, originally recorded in 1998, was initially scheduled for a 1999 video release, but continually delayed before finally debuting on VHS and DVD in April 2003, alongside Spirited Away and Kiki's Delivery Service. This dub is one of only two Ghibli films (the other being Kiki's Delivery Service) which Disney "Americanized"; future Ghibli releases only featured new voicework instead of the extensive musical reworking that Laputa and Kiki's Delivery Service underwent. A 2010 re-release of the film replaced the re-scored soundtrack with the original for the subs and also removed some of the additional chatter added to the dub, but the faithful subtitle track on the 2003 DVD release was replaced with a dubtitle. This has been rectified with a reissue on BD and DVD in 2017, providing fans with the choice to see the Disney dub with either score (minus extra dialogue and redone sound effects) — as well as a subtitle track for fans of the Japanese version.

Not to be confused with either the Chinese Series Novoland: The Castle in the Sky or Castle in the Air, the literary sequel to Howl's Moving Castle, the latter of which was also adapted into a film by Studio Ghibli.