Characters / Castle in the Sky

Characters who appeared in the film, Castle in the Sky. 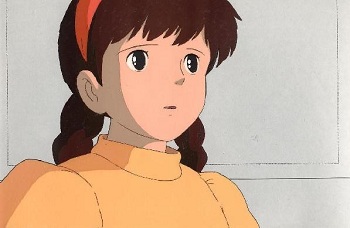 "No matter how many weapons you have, no matter how great your technology may be, the world cannot live without love."

The first protagonist of the story, Sheeta is a young girl who used to live on a farm with her grandmother. Although living an ordinary life, she secretly holds a mysterious amulet connected to the legendary city of Laputa, making her a target of the army and sky-pirates wishing to locate the city for themselves. Luckily, she meets up with Pazu, who helps her make her own search. 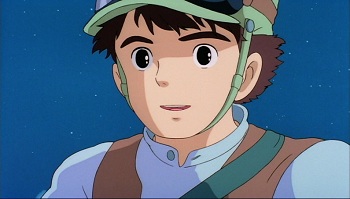 "If my head were any harder, you could use it as a cannonball."

The second protagonist of the story, a young boy working in a mining town whose father died after a lifetime of fruitlessly seeking the legendary flying city, Laputa. Wishing to clear his name, he jumps at the chance to find Laputa after rescuing a girl named Sheeta, who possesses a connection to the city. 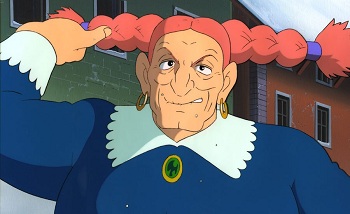 "Oh, well, ya can't be a sensitive woman like me without learnin' a few things."

The captain and mother of the sky-pirates; she's another of the people on the hunt for Sheeta and her amulet, pursuing her along with the military. 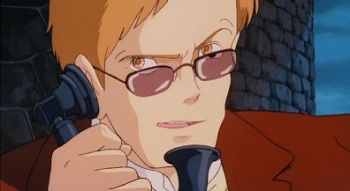 "Laputa will live. I will return it to life! Laputa's power is the dream of all mankind!"

A colonel who acts as a covert operative in the military; he takes control of the government's effort to discover Laputa. He's the movie's Big Bad and another person trying to use Sheeta to find the city, having lead the soldiers who kidnapped her before the start of the plot. Unbeknownst to the rest of the military, he seems to have his own motives for finding Laputa. 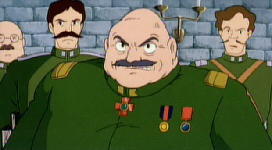 A general in the army who is one of the leaders behind the effort to find Laputa. He works with Muska only reluctantly, suspicious of his covert operations. 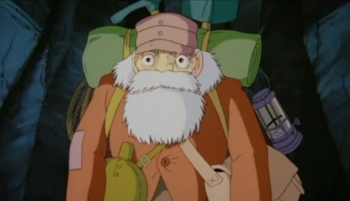 An old man living in the caves beneath the city. He possesses knowledge of Laputa and its resources, such as the aetherium that helps it to fly.

Six of Dola's sons and Motro the engineer

Dola's crew, composed almost certainly of all her sons. While occasionally bumbling and incompetent, they're all incredibly loyal to her and a formidable force in numbers.