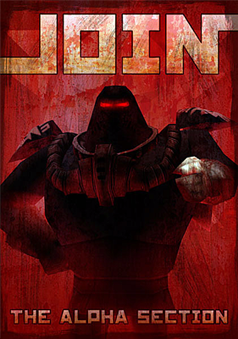 "We're here for you."
"Just miles from our doorstep, hundreds of men are given weapons and trained to kill. The government calls it 'the Army'. But a more alarmist name is: The Killbot Factory."
— Kent Brockman, The Simpsons
Advertisement:

An increasingly common variant of this trope draws on Democracy Is Bad; Soldiers try to do their job, which most of them view as "defend my home from threats" as opposed to "smash the enemy at all costs" and especially not "let's go destroy somebody else's home". They may have incomplete information or bad judgment, but most of them want to do the Right Thing, and are willing to sacrifice themselves to that end at the drop of a hat. They just run smack dab into Sturgeon's Law—for every superior that is A Father to His Men, an Officer and a Gentleman or even just a plain old Reasonable Authority Figure, there are dozens if not hundreds of General Rippers, General Failures and/or Neidermeyers looking to pull a fast one—and as soldiers they are supposed to obey all of them. This is sometimes called "Hate The War, Love The Soldier".

Historically, the English-speaking world has been highly suspicious of standing armies, especially as opposed to local citizen militias. Standing armies were seen as the tool of distant and oppressive centralizing despots, while local militias defend the rights of the people. As a result, Britain subjected the Army to very tight budgetary scrutiny and tended to keep it small and largely overseas; the US did much the same thing upon independence. This is part of why Britain has a Royal Navy, but not a Royal Army. Eventually, both Britain and the US were forced by the circumstances of history to adopt the conventional model of large standing armies; however, while suspicion of the military has all but disappeared, traces of the old attitude remain in the form of the US protection of the "right to bear arms", and the tradition in both countries of organized, state-supported but locally-controlled militias lives on in the form of the National Guard in the US and the Territorial Army (now renamed the Army Reserve) in Britain, as well as the British tradition of tying military units to specific locations.

Also historically, people in the rest of the world may well see militaries in this light due to the many, many, MANY military dictatorships that were set up in the interwar period in Europe and in Latin America before and during the Cold War. Turns out setting up a Day of the Jackboot in your own country isn't good PR. Costa Rica

, for example, abolished their standing military after a 1948 civil war. For other countries without a standing professional military, see here