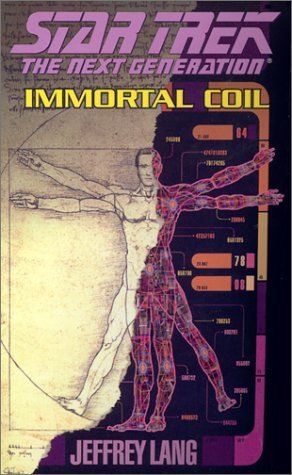 A novel in the Star Trek Novel Verse, written by Jeffery Lang.
He is perhaps the ultimate human achievement: a sentient artificial life-form — self-aware, self-determining, possessing a mind and body far surpassing that of his makers, and imbued with the potential to evolve beyond the scope of his programming. Created by one of the most brilliant and eccentric intellects the Federation has ever known, the android Data has always believed he was unique, the one true fulfilment of a dream to create children of the mind. But is he? Investigating the mysterious destruction of a new android created by Starfleet, Data and the crew of the USS Enterprise uncover startling secrets stretching back to the galaxy's dim past. That knowledge is coveted by beings who will stop at nothing to control it, and will force Data to redefine himself as he learns the hidden history of artificial intelligence.
Advertisement:

The novel received a direct sequel (three of them, actually) with David Mack's Star Trek: Cold Equations series, which was in turn followed by Lang's Star Trek The Light Fantastic.