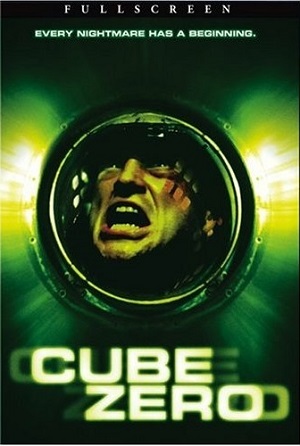 Cube Zero is a 2004 Canadian science fiction/horror film and the third film in the Cube series, although it's a prequel to the original.

Two technicians, Wynn (Zachary Bennett) and Dodd (David Huband), are observing the occupants of another Cube. Having to oversee all the deaths inside on a daily basis, they're both resigned to their permanent jobs and afraid of ending up in there themselves. Things change when Wynn becomes interested in one of the captives and discovers that her use as a lab rat wasn't properly authorized. He heads down to the lower levels to help them, upon which the higher-ups in charge of the Cube project send down their own team to extract Wynn.