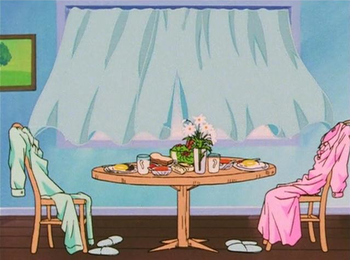 Man, they wasted a perfectly good breakfast.
"Either something horrific happened, or there's a naked dwarf running around somewhere..."
— The Dwarves, Deep Rock Galactic
Advertisement:

Stumbling across a discarded pile of empty clothing is a bad thing in Fiction.

After all, those clothes used to belong to somebody, and people don't just... decide to take off and leave their clothes behind on a regular basis. (Sure, Naked People Are Funny, but let's be serious here.) Therefore, discovering a pile of uninhabited clothing is a definite clue that something... unnatural happened to its owner. The cause may be anything (disintegration, a Shrink Ray, Baleful Polymorph, Caught Up in the Rapture, an Out-of-Clothes Experience, overdosing on a Fountain of Youth, etc.) but for this trope to play, an onscreen character, the audience — or both — must be less than certain about the how. The Foreshadowing goes double if the clothing is ripped, torn, or otherwise provides forensic clues about what might have happened to them.

This can be considered a combination of No Body Left Behind and the inversion of Magic Pants: For example, if a character was subjected to a transformation into some kind of monster (say, a werewolf), they may have had to rip and shred their own clothing off during the process (unless the process did this all by itself). If the owner's companions should stumble across this monster standing near an empty pile of their friend's shredded clothing, they might mistakenly assume that the monster killed the person (unaware that said monster is person).

Compare Skeleton Crew or Smoldering Shoes, which are similar visual hints that something ominous has happened to a character.

In the event that the owner was merely teleported somewhere else and is otherwise fine (sans clothing, that is), see Naked on Arrival. If the audience and characters onscreen see exactly what happens to cause a set of empty clothes, see Shapeshifting Excludes Clothing.

If clothes are left behind because that's how an endangered person got away safely, that's Giving Them the Strip. If it's Played for Laughs and the character is otherwise fine, it's Right Out of My Clothes.

Notice: As a DEATH TROPE (sometimes), there can be SPOILERS here. Beware!