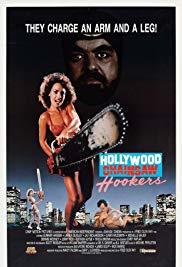 They Charge An Arm And A Leg!
Advertisement:

Hollywood Chainsaw Hookers is a 1988 American parody of the Slasher Movie directed by Fred Olen Ray and starring Jay Richardson, Gunnar Hansen, and Linnea Quigley. It concerns a cult of prostitutes who kill people with chainsaws. Private detective Jack Chandler (Richardson) tries to track down Samantha Kelso - a teenage runaway (Quigley), and in the process, they run afoul of a cult of Egyptian chainsaw-worshipping prostitutes led by "The Master" (Hansen).