Film / The Voyage of the Dawn Treader 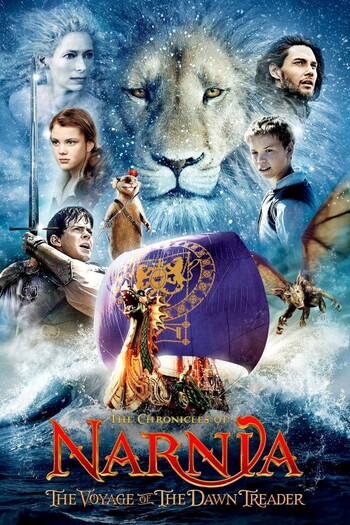 The Chronicles of Narnia: The Voyage of the Dawn Treader is a 2010 fantasy-adventure film based on The Voyage of the Dawn Treader, the third novel in C. S. Lewis' epic fantasy series The Chronicles of Narnia (and fifth in internal chronological order). It is the third installment in The Chronicles of Narnia film series from Walden Media. This is the first film in the series to be distributed by 20th Century Fox, as Walt Disney Pictures chose not to produce the film after a budget dispute with Walden Media (but they did buy the rights to this film after they brought Fox nearly a decade later, ironically). It is the only film in the series to be released in Digital 3D.

The film is set three Narnian years after the events of Prince Caspian. The two youngest Pevensie siblings, Edmund (Skandar Keynes) and Lucy (Georgie Henley), are transported back to Narnia along with their cousin Eustace Scrubb (Will Poulter). They join the new king of Narnia, Caspian (Ben Barnes), in his quest to rescue seven lost lords and to save Narnia from a corrupting evil that resides on a dark island. Each character is tested as they journey to the home of the great lion Aslan at the far end of the world.

The Voyage of the Dawn Treader provides examples of: