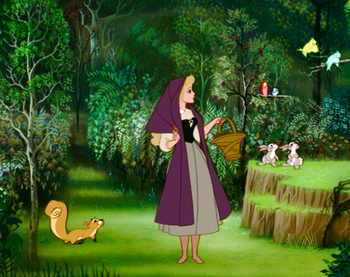 Apparently, animals tend to gravitate more toward people who don't wear shoes.
Rapunzel: You never wear shoes either?!
Willow: I've always said, "How can you know where you stand in the world if you can't feel the ground beneath your feet?"
— Tangled: The Series, "The Way of the Willow"

Characters who walk barefoot are often shown to be close to nature, animals and their surroundings. These characters are sometimes depicted as a Wild Child or Nature Hero living in jungles, forests or in the wild. They tend to be deeply connected to animals (and may even have the ability to talk to them) and plants in general. They tend to be more respectful of the land and the earth. At the very least, they are the Nature Lover.

As for personality, they are usually carefree, down to earth, stubborn or energetic. If they have powers, they'll usually get Dishing Out Dirt or Green Thumb. They may also posses some mystical abilities like controlling animals, changing the weather and such.

Bare feet are probably used for this as you can feel the ground beneath you (therefore you'll be "connected" to the earth) and you wouldn't really get that feeling from shoes or socks, so generally, a character exhibiting this trope Does Not Like Shoes. Characters with powers sometimes require this connection to the earth for their powers to work, making bare feet a necessity for them.

This trope is sometimes used to depict the deeply connected to the land characters in contrast to the more land ownership system believing characters; the former are barefoot and the latter wear shoes.

If played realistically, such a character, particularly a human character, might have particularly calloused and dirty feet, especially if done on concrete and other hard surfaces, but Beauty Is Never Tarnished often rules this out, especially when it's used for the sake of Author Appeal.

Related to Fertile Feet. Commonly, but not always, a Subtrope of Does Not Like Shoes. Compare and contrast with Barefoot Poverty, Barefoot Sage, Barefoot Loon, Magical Barefooter, and Undead Barefooter. The Hot Gypsy Woman, Nature Hero, Jungle Princess and Noble Savage are frequent examples of this trope.