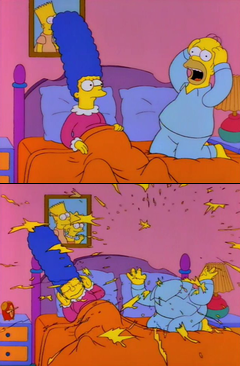 Looks like Homer got a-head of himself.
Hans: A head can't really explode just because it's shot, right?
Marty: It can. If it's filled with explosives.
—Seven Psychopaths
Advertisement:

Stuff Blowing Up is cool enough, but it somehow becomes even cooler when that stuff is human heads. Asploding heads may not be particularly realistic in some cases, but they sure look impressive. If people's heads start blowing up, it's usually a bad sign.

and subsequent game StrongBadZone on Homestar Runner, wherein the head of the person playing the game is presumed not to have actually asploded, although there have been no studies done on the matter so far as we are aware.

Head asplosions are typically the result of an Explosive Leash, being shot in the head with high-powered ammunition (resulting in Pink Mist, which is Truth in Television. Water is largely incompressible, so a large caliber, high velocity bullet entering the skull would transmit that energy throughout the interior and pop! goes the cranium), interacting with a Brown Note, or absorbing too much knowledge. Often, just before it happens, the unfortunate character clutches their skull.

There's also the metaphorical (and occasionally literal for Mechanical Lifeforms) asploding that is said to occur when one's brain has gone mad from the revelation, or assaulted by a Mind Rape or Logic Bomb, or requires sufficient Brain Bleach.

For less explosive loss of heads, see Off with His Head! For head impacts that aren't as violent, see Cranial Eruption. For heads getting crushed instead of exploding, see Head Crushing.

Gaming in the 90s

Gaming in the 90s