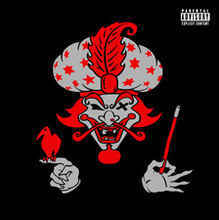 Down With The Clown

"Great Milenko wave your wand
Don't look now, your life is gone
This is all because of you
What you got yourself into"
—"Halls of Illusions"

The Great Milenko is Insane Clown Posse's Fourth Joker's Card, released in 1997. The album was originally released on the Disney-affiliated Hollywood Records, until pressure from the Southern Baptist Convention led to the album being recalled and ICP's tour and all other plans being cancelled. Island Records agreed to release the album. It was eventually certified platinum.

"Ima be down with the tropes!":