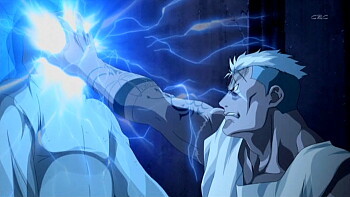 "Your face a splode!"
"THIS HAND OF MINE GLOWS WITH AN AWESOME POWER!"
— Domon Kasshu, Mobile Fighter G Gundam
Advertisement:

Sometimes, you need to let the Big Bad have it right where it hurts. Sometimes, you just gotta burn that smirk off of The Dragon's face in the most direct and painful manner possible. Sometimes, The Hero deserves to know just how powerful you are when you're Drunk on the Dark Side.

Sometimes, you just need to give them the Facepalm of Doom for massive damage.

The Facepalm of Doom, named so because it is a Facepalm... of Doom, is basically when you grab someone by the face, or sometimes just by the head, but usually the face, and proceed to unleash the pain by releasing some kind of energy, activating a weapon contained in the hand, or in a more bloody series, crushing it. As you can imagine, such a move is probably extremely painful and is usually pretty high up there in terms of power. Due to the nastiness inherent in assaulting someone's visage, as well as the frightening potential for Eye Scream, this trope is generally indicative of The Unfettered, an Anti- or Unscrupulous Hero, the Obviously Evil, or someone who has had their Berserk Button mashed extremely hard or otherwise reached their Rage-Breaking Point. It is essentially the bare-handed equivalent of shooting an opponent executioner-style, and carries many of the same connotations.