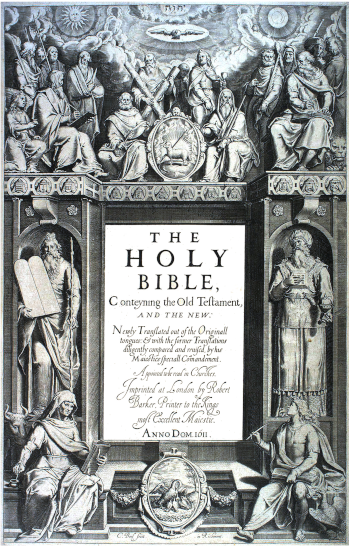 "In the beginning God created the heavens and the earth..."
— Genesis 1:1
Advertisement:

Before we get to the tropes used in the Bible, it should be noted that there are several different traditions as to what the Bible contains; while most material is shared, historically members of religious groups have decided to include or exclude different writings. The Book of Tobit, The Book of Judith, the Maccabees books, and many others are included in some traditions' orthodoxy and wholly ignored by others' (as is the entire New Testament, for that matter). Debates about what's Canon and what isn't continue to this day. That's not taking into account the multitude of different translations out there, not only between languages but within each language—leaving plenty of room for cases of Lost in Translation.

On a related note, there are several major opinions on what the Bible is. According to the Christian viewpoint, the Bible is an anthology of books by divinely inspired followers of God and Christ over a period of 600 to 1600 years, including: biographies, histories, manuals of rules and laws, songs and ritual prayers, advice for living like in Paul's letters, and divine revelations. (For the traditional Jewish perspective, strike out the words "and Christ" and "like in Paul's letters," and reduce the number of years by two to six hundred years.) There is debate among Christians over just what "divinely inspired" entails; some say this means everything in the Bible should be taken completely at face value, while others hold that some parts (like the book of Genesis, for example) are meant to be taken as allegorical or symbolic writings, not to be interpreted literally. The latter view is held by most mainline Protestant denominations and is the official position of the Catholic Church.

Another set of interpretations was from what is now called, collectively, Gnosticism. The Gnostics did not accept the idea of canon at all, nor any central religious authority. Thus, pretty much every Gnostic collection of scripture contained different sets of documents, some orthodox canon and some written locally. Indeed, the general Gnostic approach to religious literature was one of extreme openness, and a new Evangelion (no, not that one) probably appeared within the various Gnostic communities every day. The Gnostics believed in personal and continuous revelation rather than authority of scripture.

The view of those who don't belong to the Abrahamic religions generally ranges from seeing the events of the Bible as somewhere between "exaggerated history" and "pure fiction".

Comprising the works of many writers from the 11th century BC to about 200 AD, before the advent of mass communication, the Bible is one of humanity's best-known and longest-enduring books, with 1500 ancient surviving Greek manuscripts making it the ancient world's best seller (Homer, with 643 surviving manuscripts of The Iliad, comes in second). The absence of a single authority with a strictly defined canon policy has proven an obstacle, however. Or rather, the existence of dozens or hundreds of conflicting authorities. Historically, it resulted in some of the most devastating Flame Wars ever, and in actual wars as well.

It's worth noting that dating the Bible (no, not that) is one of the most contentious issues surrounding it. The consensus secular view, which mainline Protestants and Catholics more or less accept, is that the first five books (the Pentateuch or Torah), along with some of the histories were compiled around 450 BC, from four source texts, the oldest of which dates back to about 800 BC. The prophetic and wisdom literature (the rest of the Old Testament) was compiled and redacted over the next century or two, though some of the Psalms may go back to 1000 BC. The traditional view - accepted by fundamentalist and most evangelical Protestants, as well as Orthodox Jews, is that the whole Pentateuch was dictated to Moses around 1500 BC, while the prophetic books were written by the authors they're traditionally ascribed to from about 900 to 500 BC.

Due to the Bible's sheer size and literary value, in addition to the fact that it is in the public domain (as it predated the invention of copyright; the British Crown holds perpetual copyright over the King James Version in the UK and some newer translations are copyrighted), it is often used as a goldmine of stock plots and characters for modern writers. Sometimes, however, said modern writers cannot avoid the temptation to introduce gratuitous references for the sake of it, and when they take caution to avoid controversial subjects like a specific religion, it can degenerate into such phenomena as Jesus Taboo, Crystal Dragon Jesus and No Celebrities Were Harmed. On the other hand, writers unfamiliar with the religious symbolism can end up with "controversial" character portrayals like King of All Cosmos, or, in The Theme Park Version, Fluffy Cloud Heaven.

Often cited by Moral Guardians. Not to be confused with Universe Bible.

One of the Trope Makers; tropes that appear in it are by definition Older Than Feudalism. While some parts of the Old Testament may be somewhat older than 800 BCE, it would be very confusing to try to sort tropes into multiple indexes based on which book and verse they came from.

Books of the Bible that have their own pages