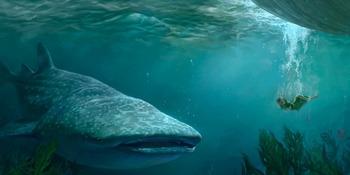 What a lovely day for a swim!
Advertisement:

The Book of Jonah comes from the Old Testament and is grouped with the Minor Prophets. This is the one with the whale.note Which in the original Hebrew is just called "great fish", using a generic word for "fish" that can refer to anything from a shark to a salmon.

In the reign of Jeroboam II, the Lord speaks to his prophet Jonah ben Ammitai, telling him to go to the capital of the Assyrian Empire, Nineveh. The city's wickedness will be punished with destruction if they persist, but God wants Jonah to give them a warning so they have a chance to repent. However, Jonah doesn't want to go to Nineveh, as they had a reputation for being extremely cruel, and instead flees his mission on a voyage to Tarshish in Gaul (Spain!)

The Lord strikes the ship with a storm, and the sailors cast lots to find out why it's happening. When the lot falls on Jonah, he admits that he's a prophet who's abandoning his mission. He urges the sailors to throw him overboard so that the storm will cease upon his death. Though the sailors try to avoid this by attempting to row back to land, the storm proves too great and they toss Jonah into the sea. Immediately the storm ends.

Jonah doesn't drown, though, because God provides a you-know-what to swallow him and take him to Nineveh. For three days Jonah prays inside the beast, thanking God for giving him a second chance. The beast then vomits Jonah onto dry land and the prophet treks away to the city.

At Nineveh, Jonah preaches to the people that, unless they repent, the entire city will be destroyed in forty days due to their evil. The Ninevites are struck with fear and spend those days in fasting and mourning, thus convincing God to spare them. The Ninevites rejoice at being given mercy, but Jonah does not celebrate with them. He exits the city soon after and watches it from the plains in hope of God still smiting them anyway.

The Lord provides a vine to grow and give his prophet shade. The next day, though, Jonah wakes up to find the vine dead. He curses God for killing the plant, and the Lord responds to Jonah with a What the Hell, Hero? for being more concerned about a plant than for a city filled with thousands of people.

That's How it Ends?

The oft-forgotten "ending" of the Book of Jonah is adapted in the VeggieTales version, with Khalil (in place of God) telling Jonah the importance of forgiveness, and we never find out if Jonah learned anything.

That's How it Ends?

The oft-forgotten "ending" of the Book of Jonah is adapted in the VeggieTales version, with Khalil (in place of God) telling Jonah the importance of forgiveness, and we never find out if Jonah learned anything.