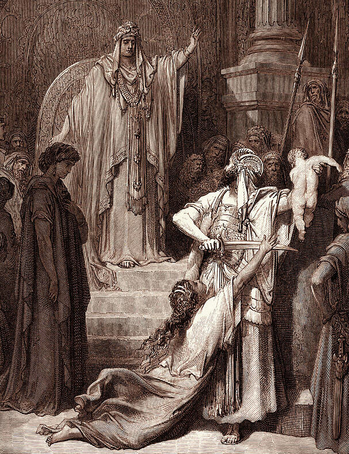 You're either the ruler of the land, or someone else whose job is to arbitrate between people. Either way, you have a problem. There is an object whose true ownership is under dispute. Alice says it is hers, and Bob says it is his. This is usually a living thing, such as a baby. How do you figure out the true owner? Threaten to destroy the object (traditionally by cutting it in half and giving one half to each claimant, in the knowledge that half of it is no good to either of them).
Advertisement:

In the end, Alice would rather see it given up to Bob than have it destroyed, and Bob is all too happy to receive it (or, alternatively, Alice is the first to object). Alice is the real owner, revealed by her compassion.

In straight examples, only one party will object, because there is no middle ground between the rightful mother and a sociopath who would rather have half a dead baby than let someone else raise a live one; alternatively, the failure to object may simply be a case of calling the judge's bluff, but the fact that one party was willing to even take this risk while the other was not is generally sufficient proof in itself. In a common subversion, both claimants object, leaving the would-be Solomon stumped.

A common variation in logic puzzles is to have both parties already agreeing to split something that is inherently difficult to split fairly, but not being able to agree on the exact method. The most common solution is to have one party decide how to divide the lot and the other party choose which half to take — this gives the splitter every incentive to divide it as fairly as they can manage.

Often subverted nowadays. Compare Disney Dog Fight and Spot the Imposter. Super-Trope of Solomon Divorce, where divorcing parents split their children up so there's at least one for each. See also No MacGuffin, No Winner and Tear-Apart Tug-of-War.

Parodied. Homer becomes King Solomon in a dream, and plays the mediator between Carl & Lenny over a pie.

Parodied. Homer becomes King Solomon in a dream, and plays the mediator between Carl & Lenny over a pie.