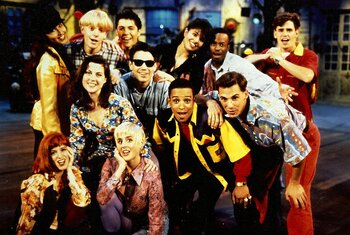 Welcome Freshmen is a Nickelodeon series produced from 1991 to 1993 (with reruns airing until 1996) that took place at the fictional Hawthorne High School. The main characters consisted of freshmen Merv, Alex, Tarah, Kevin, and Walter, and their principal, Elliot Lippman, who often imagined himself as a stand-up comedian. In the third season, Tarah and Merv left and new students Manny, Erin, and Grant were added to the cast.

Originally, the show was a sketch comedy show, with the sketches tied to a theme (such as "money" or "holidays"). In the third season, the format changed to a more typical tween-oriented sitcom. Basically, Saved by the Bell but far more cynical and less moralistic.