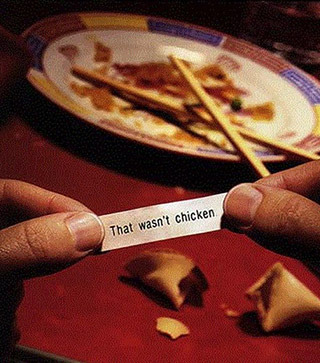 Oh crap...
"Once it's in the soup, I call it beef."
— Greasy Sae, The Hunger Games, talking about wild dog meat

Food of unknown composition. Like sausages, which is all the parts of meat they don't put in dog food.

Most of this comes from a largely cultural misconception of food and people who have little to do in preparing their own meals, especially anything that doesn't look like its origin. It's also much easier to demonize foods that rationalize an irresponsible diet. Thus you have certain kinds of food everyone hates in any form.

Scares from the early 20th century aside, cheap sausage is generally made of chunked pork or other meat, some offal and other things wrapped in intestine and loaded with salt. This is unhealthy in large quantities, but there's nothing inherently toxic about it. TV has you believe that hot dogs are Mystery Meat.

Meatloaf is another scary food, which ignores the entire point of adding filler to it to stretch a beef budget and not to cover up bad cooking. Meatloaf is always portrayed as some horrific dried-out swamp log, although this is largely true of any improperly baked food.

Another common accusation leveled at such foods is that they're made from creatures not traditionally considered edible: vermin like rats and (these days)

pigeons; domestic animals like cats and dogs; or, worse yet, stray cats and dogs, which are verminous and domestic at once. (Opinions vary as to what creatures are considered edible — sometimes even with the passage of time, as with pigeons no longer being edible in the US.) If someone finds out what they ate, expect I Ate WHAT?! as a response.

It may or may not taste like feet, just don't think about what it's made of if it does—or maybe you should. Sometimes the food is so disgusting that Even the Rats Won't Touch It.

This trope even applies to Mascots and Non-Human Sidekicks more often than not: they'll be unwilling to eat organ meats, for example, even though in real life wolves and most other predators will go for organ meats first. Likewise, dogs will be averse to animal rinds/skins—again in sharp contrast with real life.

Any US show, cartoon, or movie which touches on elementary through high school can be expected to have at least one gag about this. Standards in educational institutions' food used to be quite low: strict health and safety guidelines were enforced, but flavor didn't matter, and what counted was just that it wouldn't kill you. These days, things are pretty good (school lunches are for-profit, so they try to be more palatable than bringing your own lunch; but they're also held to pretty strict dietary-health standards); but most content-creators came of age before these reforms, and old memories die hard, especially comical ones.

Anime will be just the opposite of this. Most animes that deal with schooling will portray school cafeterias with a quite high standard of food—and often at least one item so good that students have to race to get there before it sells out.