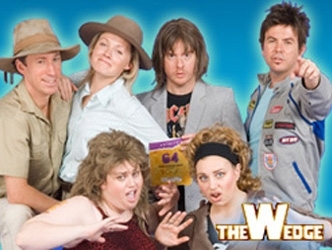 The Wedge was an Australian sketch show created by Ian McFadyen and produced by Network Ten. It ran for two seasons, airing 2006 and 2007.

The Wedge was a typical Australian sketch comedy similar to Fast Forward or The Comedy Company. The major difference was that nearly all the sketches took place in the same town, the fictitious suburb of Wedgedale, so the transition from sketch to sketch often involved a reference to the previous one.

The most popular series of sketches involved the scandal prone athlete Mark Warey, whose public apologies for his latest "indecent" would invariably make the situation worse. The Mark Warey character was featured in his own Spin-Off; the Mockumentary Mark Loves Sharon.

The Wedge contains examples of: