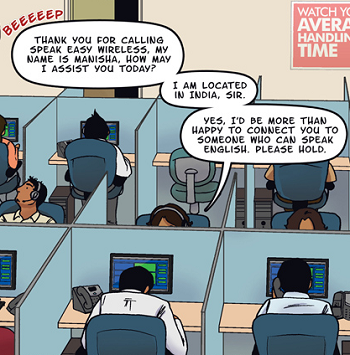 Spoiler alert: the next representative is also in India. So is the manager they'll demand to speak to.
"You have reached the Operator From India page. My name is Tom. How may I be helping you today?"
Advertisement:

A Race Trope, where phone calls are redirected to outsourced operators in far-away countries. Expect the problems other native speakers encounter with foreign accents (and overuse of the Military Alphabet so both parties can understand each other) to be comedy fodder. It doesn't have to be India, but it usually is.

One aspect of it might be using a stereotypical "English" name, when you can probably guess that they don't have an English name. They do this in part to make it seem less like they've routed your call outside the country and in part because you're not likely to be able to pronounce their real name.

While this is a relatively recent thing (almost unheard of before the 2000s), the trope is now firmly established as Truth in Television. While India is a common location for call centers due to its large population and history of British colonization, several languages also have their own "ex-colonial" locations (eg. Algeria for Francophones). The trope often relies on quirky and incomprehensible accents, but modern-day call centers tend to have well-trained speakers.

For Inconvenience, Press "1", or dial The Operators Must Be Crazy.