Series / The Weekly with Charlie Pickering 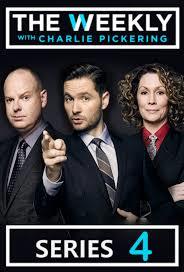 The Weekly with Charlie Pickering is an Australian satirical television news program presented by comedian Charlie Pickering. It originally co-starred Tom Gleeson and Kitty Flannagan. In series 5, Kitty left and was replaced by Judith Lucy. The show premiered on ABC on 22 April 2015.

The show starts with a cold open which consists of a short introduction to the guests and main stories coming up. The program's format has been compared to Last Week Tonight with John Oliver, following a similar structure. Charlie Pickering delivers a selection of the past week's news stories interspersed with jokes. Similarly to The Daily Show, most episodes feature a cross to a specialised correspondent (including Adam Briggs, Loyiso Gola, Jonathan Pie, Tiff Stevenson, Zoë Coombs Marr and Wyatt Cenac), and/or an interview with a guest. A previously prepared sketch, story or interview is usually presented by Tom Gleeson and Kitty Flanagan/Judith Lucy.

Tropes used in The Weekly with Charlie Pickering: