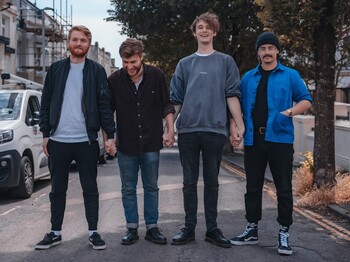 Left to right: Mark Boardman, Joe Goldsmith, Wilbur Soot, Ash Kabosu.
"One day, I know that you will be there
One day, I'll focus on the future, maybe
One day, oh baby isn't life so
Fucking inconsistent"
— "One Day"
Advertisement:

is a British four-man indie rock band, formed in early 2021. Named after a friend of the band, Benedict Lovejoy, they debuted on May 10th, 2021 with their EP "Are You Alright?", along with two music videos for the songs "One Day" and "Taunt".

Their debut EP was released on Youtube first, with iTunes and Spotify releases in the days after. The EP peaked to number one on the US iTunes charts, and the music videos for "One Day" and "Taunt" reached a million views within 21 and 22 hours of initial release respectively.

Not to be confused with Lovejoy, the 1986 British comedy-drama series.

Tropes provided by Lovejoy include: