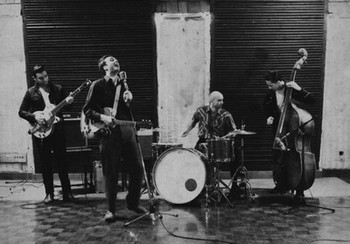 "I had a vision tonight that the world was ending, Yeah the sky was falling and time was bending"
"To the ends of the Earth, won't you follow me?"
Lord Huron is a Los Angeles-based indie folk band consisting of Ben Schneider (Lead vocals, guitar), Mark Barry (Percussion, vocals), Miguel Briseño (Bass, keys, percussion), and Tom Renaud (Guitar, vocals). Originally, the band was a solo project by Schneider, who released the first few EPs on his own in 2010. Other members of the band joined later to help play live shows. The band has since released four albums: Lonesome Dreams in 2012, Strange Trails in 2015, Vide Noir in 2018 and Long Lost in 2021.
Advertisement:

With the release of Lonesome Dreams, the band began releasing a series of music videos, each in a '70s Western style and forming a sort of narrative for the album. “We had this fun idea that Lonesome Dreams was kind of this series of old adventure tales. It's sort of a collection of pulp fiction and we wanted the videos to kind of reflect that and have that same feel and style,” Schneider said in an interview. This same music video style would be carried over and used again for Strange Trails.

I've been troping high and low: