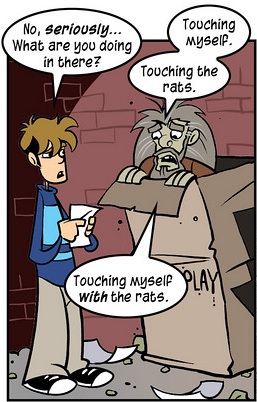 Sometimes this happens as a consequence of Stereo Fibbing. If it's incorporated into The Plan, it may result in being Crazy-Prepared.

This is almost always played for laughs, and prone to creating Ninja Pirate Zombie Robots. ("Zombies? Werewolves? Ghosts? Haunted werezombies?" etc.) Compare Shaped Like Itself, and Bill... Bill... Junk... Bill.... Not to be confused with Bread, Eggs, Milk, Squick. Morton's Fork is a variant.

Not related to actual breaded eggs

(although they do count as an example).

Alternative Title(s): All Of The Above