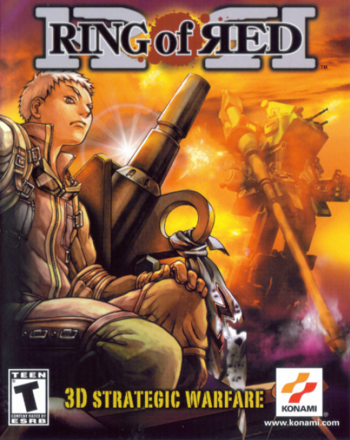 Not to be confused with that problem your Xbox 360 has hanging over its head. Or a Heroic Red Ring of Death.

What would happen if Japan never surrendered after the Americans dropped the nuclear bomb? And if Germans developed Humongous Mecha? This is explored at the action-strategy game Ring of Red. The American-led Allied forces, following the success of Operation Downfall, and the Soviet invasion of Japan from Hokkaido and after much fighting divide the archipelago apart with Hokkaido being renamed to Vastokayask. After that, the Korean War is simply reallocated to Japan, which is divided into South Japan, capitalist, and North Japan, communist. The plot takes place in 1964 with Masami von Weizegger and Ryoko Minakawa, two South Japanese test pilots who end up charged with recovering a stolen prototype mech during a North Japanese-led infiltration mission.

The mechas, named Armored Fighting Walkers (AFW), as would put the Miguel Lopez from Gamespot, "Unlike the lithe, sleek mechs that we've come to associate with the genre, Ring of Red's cumbersome, gas-powered mechs aren't graceful in the least. They're heavy machinery, first and foremost, no more deft than a six-ton crane or a Ferris wheel.". They had replaced tanks as primary land-warfare vehicle, for harsh terrains, like the Japanese territory.

It is now available for download from the Play Station Network. PS2 game discs are still available, albeit rare unless one scours Ebay and other sites and stores that sells used copies of the game.