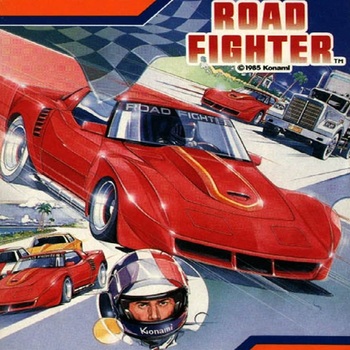 Road Fighter (Japanese: ロードファイター Rōdo Faitā) is an arcade Racing Game developed and published by Konami in 1984. As with most titles of the era, the game's objective is simple: participate in a Cannonball Run-esque race through a series of straight courses while avoiding obstacles and keeping watch on the fuel gauge, collecting specially-coloured cars along the way to replenish it.

The game consists of four courses (five in the original arcade release), along with the car having two speeds, one propelling the player car to around 196 km/h (120 mph), and the other hurtling the car at 400 km/h (250 mph). Naturally, going at such an insane speed isn't without its risks, as colliding with objects such as side railings or trucks would cause the car to explode; crashing into any other car or an oil slick is a tad less risky, but can and will chain into a deadly collision if the player isn't careful enough. Konami Man also makes a cameo appearance in some levels and grants the player a bonus should he/she be able to race his/her way through without any collisions.

Ports for the MSX and the Nintendo Entertainment System were later released in 1985, with the PAL NES version being released in 1991. Since its release on the NES, it has become a staple of pirate multicarts and NOAC-style plug and play systems in the 90s and well over into the early 2000s, with some releases (one such example being the NTDEC bootleg removing the Konami logo and replacing the copyright notice to "1990 NTDEC") removing any copyright notices as an attempt to dodge the authorities.

The game was also re-issued as part of Konami Arcade Classics in 1999 and on Konami Classics Series: Arcade Hits for the Nintendo DS, with a Japan-only mobile phone version for i-mode devices being released in 2005.