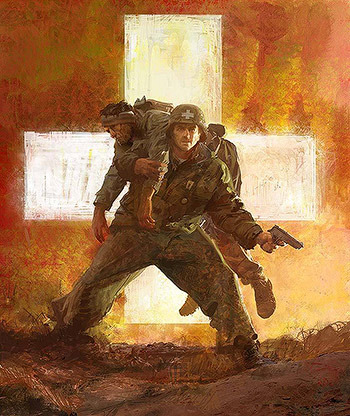 The doctor is ready to see you. All of you.
"Death or healing: I care not which you seek."
— Space Marine Apothecary, Warhammer 40,000: Dawn of War
Advertisement:

Being the designated healer is a necessary job, but it isn't a glamorous one. While everyone else is having all the fun mixing it up with the bad guys, the medic is stuck in the back watching life bars go up and down, and throwing out the occasional Status Buff. Then again, they don't want to be up front, because they're squishy as hell and everyone's gunning for them. This is usually not a problem when one player's controlling an entire party, but this starts to break down in cases where one guy's playing the support. While some are perfectly fine with this (being the medic means you'll get invited to just about any party), for others, the support classes just aren't that exciting.

The solution? Give The Medic some teeth, and you've got yourself a Combat Medic.

While a Combat Medic still serves as the primary healer and buffer, they have the ability and incentive to leap into the trenches and kick some ass, too. This can be accomplished in a number of ways, including 'protective auras' that buff nearby allies while the medic fights, or attacks that simultaneously heal the medic's allies. Enemies that try to Shoot the Medic First will find that they won't go down as easy as they expected when they can create impenetrable force fields or just swat them into the stratosphere. Last but not least, certain tactics can make their harmless powers lethal, like casting revive on enemies when Revive Kills Zombie.

The militant medic isn't unique to video games, either; healers often find it necessary to pick up some combat ability and kick a few asses every now and then if they don't want to be stuck in the background. After all, in an action series, the Hippocratic Oath is a rather overrated thing, and the Geneva Convention is simply quaint and obsolete.

The Combat Medic may also overlap with a Bare-Fisted Monk, or a monk wielding a Power Fist. Some games do in fact give the monk limited healing capabilities, or a few self-heals. This is linked to Shaolin Monks knowing Martial arts and the term "monk" often being synonymous with a religious figure. Since religious figures almost always are Healers, this explains why it is often used.

Compare The Paladin. The Magic Knight is rather similar, though defense-oriented Magic Knights tend to be focused on fighting first and healing second. Contrast The Red Mage, a mage who knows healing and attack magic. Another RPG fantasy class that greatly resembles this is the cleric, who is usually a religious warrior healer. The laws of balance must also state that a pure healer would have to outclass them in healing and that a Combat Medic Paladin or a monk that can heal has to sacrifice some common healing traits to be able to take a few hits. But this only really applies when you have a group-oriented game, especially an MMORPG, because why would you roll a squishy-healer when you can roll a Combat Medic that can take a few hits and heal just as good either way? In a solo game, it's not uncommon for a Game-Breaker to be just like that.

Note that this is Truth in Television. During World War II, military medics were supposed to go into combat with no weapons and treat the wounded of either side. However, German medics were often armed with pistols, and this led Allied soldiers to be somewhat skeptical of the non-combatant status of German medics, as taking up a weapon meant the medic forfeited his protection under the Geneva Convention and was treated as a regular combatant, regardless of any distinguishing insignia he wore, and from the German side, troops like the SS even made it a point to use wounded soldiers as bait to lure allied soldiers out and shoot them, forcing the medics to take up arms and protect themselves. In the Pacific and the Eastern Front, there were no niceties at all — both sides considered medical personnel fair game, though for the Japanese it wasn't so much that they actively targeted medical personnel, more that they had no concept of noncombatant medics; to them, a soldier was a soldier. In fact, by the end of 1941, medics in the Russian Theater even stopped wearing medical handbands because they both were useless and painted them brighter as targets. Nowadays, this trope is even encouraged in real life, due to the fact that most modern armies engage in combat with forces that do not respect the Geneva conventions.