Fanfic / With This Ring 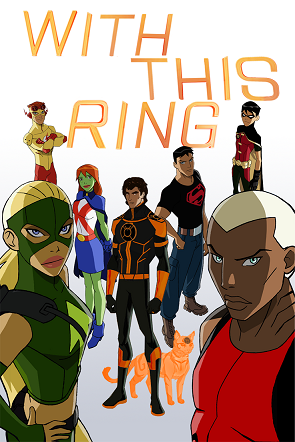 The Team
Artemis: Can you actually do all this stuff?
Paul: Um, probably?
Artemis: Faster than light travel.
Paul: Of course. How do you think Lanterns patrol their sectors?
Artemis: Create an energy shield a mile across?
Paul: About that. I struggle to go above a kilometre.
Artemis: Turn people into constructs?
Paul: You've met Teekl, right?
Artemis: Accelerate your brain?
Paul: Yeah, but that always feels-.
Artemis: Alter every cell in someone's body?
Paul: You've seen the rats.
Artemis: And what exactly did you do to earn this?

I shrug. Can't deny that I kinda won the superpower lottery.

Paul: Nothing. Or if I did, I don't know what it was.
Advertisement:

. It features him as Orange Lantern 2814, and a founding member of The Team, after he mysteriously appears in near-Earth space wearing a power ring at the beginning of July 2010 (canon season 1). His presence, meta-knowledge, and powers have increasing ripple effects as time goes on, thoroughly altering or derailing many canon events and exploring the wider DC universe; he works with the Young Justice team for a year, setting the Light's plans back and refining his skills, then goes out into space to recover the Orange Central Power Battery, form a Lantern Corps, and lead a war against the Reach.

Not to be confused with the trope With This Ring, which is about wedding rings, or with the similarly named Green Lantern fanfiction.

Chapters are released daily (since 2013), grouped into episodes covering an average of one in-story week, and typically written in first-person present tense, eg "My bed feels soft. Did I go to sleep on top of the duvet? Stars? Did I leave the blinds open?" As a result of this level of detail, the story is over three million words, and takes about four Real Life years to cover each In-Universe year. Mr Zoat states in the FAQ that he intends to cover the entire period of the canonical five-year Time Skip between seasons one and two, so it is expected to be in progress for decades.

Chapters are sometimes written from the point of view of alternate versions of the SI, such as one who arrived on Earth -14 (the Crime Syndicate universe) with a blue ring, or one on Earth 32 (the Teen Titans universe) with a red ring. The most prominent alternate is the Renegade, identified by the chapter timestamp appearing in red text, who started out similarly to the main timeline, but started making more direct and ruthless choices, leading to increasing divergence until the two storylines are almost entirely different. Most episodes include at least a chapter or two from the Renegade timeline, and there have been several episodes that are Renegade-first with occasional chapters from the original timeline.

There are also rare chapters written from other perspectives, such as Lois Lane (in an uplifted Omake), Lex Luthor, Justice League members, or Artemis.

The story is currently on its fourteenth thread, and has a story-only thread. Links to the threads: Thread 1

The first eleven threads were posted on Spacebattles. For Thread Twelve

and the Second Revised Story Only

onwards are on Questionable Questing, due to him being banned from Sufficient Velocity.

that shows how things could have gone if the SI went ahead in starting relationships with other characters that he didn't do in the main story. (NOTE: This thread is NSFW and requires a forum account to read).

With This Ring contains examples of: