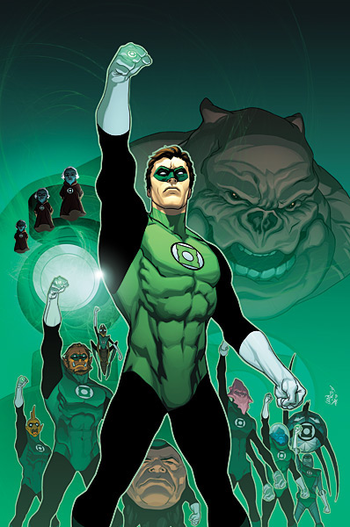 "In brightest day,
In blackest night,
No evil shall escape my sight.
Let those who worship evil's might
Beware my power—
Green Lantern's light!"
"...'Others'? Wait, you're telling me that there are people out there who have supernatural powers just like me?"
"Well... yeah. Are you kiddin me? There's thousands; we're an organization. Did you think you were 'special'?"
"...Yes."
— Exchange from a Leverage RPG session

Being The Chosen One doesn't mean being The Only One.

A hero may find they've stumbled on a powerful artifact, or awaken Magic and Powers that set them apart from everyone else they know only to find out that they're not so exceptional. Not only is there another, but a whole bunch of them. While similar to Send in the Clones, these fellow heroes have been organized and operating long before the hero ever came on the scene. All of them have the same power set and usually more experience using them under their belt. Bonus points if it turn out the hero's stylistic, "unique" costume that might've come with the powers turns out to be nothing more than a standard uniform.

In narrative terms, this discovery can go down in various ways:

A lesser-used variant is to for the protagonist to be either partially or fully aware that he's part of some large organization or race right from the get-go, but the story is intentionally written in such a way that the hero or those around him never have to bring this up and the audience is led to believe otherwise for a period of time. When its finally revealed, it's usually treated as You Never Asked on the viewers' part.

If a character is in a place where he always knew that getting superpowers was common and expected of everyone, however, then it may be Everyone is a Super.

Compare There Is Another, Send in the Clones, Legacy Character, Legacy of the Chosen, Heroes Unlimited, and the fan-made member Sailor Earth. Contrast Last of His Kind. Not to be confused with The Chosen People.

So This is Basically...

So This Is Basically Kingdom Hearts

So This is Basically...

So This Is Basically Kingdom Hearts