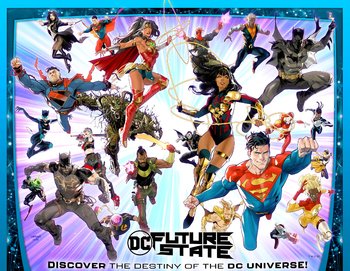 In the aftermath of Dark Nights: Death Metal, the heroes have triumphed over Perpetua and the Batman Who Laughs. However, their actions causes time-space to warp, showing a glimpse of the future...or a future. A future where new heroes don classic identities and Earth and the universe evolve in new and exciting...or dangerous ways.

Running through January and February 2021, all prior titles were replaced with a set of new books for this event, all giving a glimpse of both a possible future and events happening in the returning titles come March 2021 under the brand new banner DC Infinite Frontier.

Ahead of the event in November 2020, it was confirmed that Yara Flor, the future Wonder Woman, will star in her own Wonder Girl title later in the year, set in the main DC Universe. Similarly, Jace Fox, who is Batman during Future State, began his journey to becoming Batman in the main DC Universe in the pages of The Next Batman: Second Son.

In this future, the villainous regime known as the Magistrate rules over Gotham City with an iron fist. Bruce Wayne is dead (but not really), but a new Batman rises and gathers his vigilante allies to take back Gotham.

In the near future, an international incident leads Earth to reject Clark Kent, forcing him to focus his life-saving efforts elsewhere. In Clark's stead, his son Jonathan Kent takes up the mantle of Superman, but his actions immediately put him at odds with his aunt, Kara Zor-El. Meanwhile, Yara Flor becomes the new Wonder Woman and will team-up with the new Superman to become a new team the likes no one has ever seen before!

Then, in the distant future, the Legion of Super-Heroes and the United Planets have both collapsed. Can Ultra Boy and whatever's left of the Legion rise up and save the galaxy again?

Finally, at the End of Time itself, Diana Prince has lost both her friends and most of her fellow Amazons. When a threat that's bigger than even Darkseid himself looms forward, Diana must charge head-on lest everything that's left in the world becomes undone!

A new Justice League forms with familiar names but secret (even to them) identities, secrets an old foe seeks to use to take over the world. For the Justice League Dark, the hunters become the hunted.

The Four Riders of the Apocalypse attack Titans Academy, cutting Barry Allen off from the Speed Force; Famine possesses Wally West; and Shazam is forced to make a deal with the devil.

Elsewhere in the universe, the last Green Lanterns are overshadowed by a dead Central Power Battery, Arthur Curry and Jackson Hyde are separated across the cosmos and Amanda Waller unleashes a new-yet-creepily-familiar Suicide Squad on Earth-3.

In the far-flung future, Swamp Thing rules the end of time with an iron fist while in the 835th century, the new Black Adam must fix a problem from the past.

Tropes Involved in this Event: