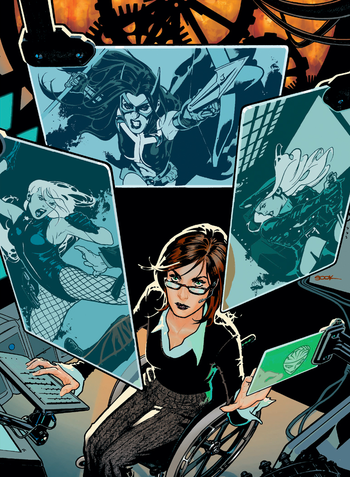 Oracle keeping an eye on the Birds.
Advertisement:

Barbara Gordon, famous as Batgirl and Oracle, is the daughter of Commissioner James Gordon of Gotham and was introduced in Detective Comics #359 (1967). She was created by William Dozier for the Batman (1966) series in the 1960s before being introduced in the comics by Julius Schwartz, Gardner Fox and Carmine Infantino.

Unlike Batwoman and Bat-Girl (characters introduced during the Silver Age), who were merely female counterparts to the Dynamic Duo, Barbara was completely independent of male superheroes, being a representation of the feminist movements of the 1960s.

Anyone who pays sufficient attention to the comics, however, knows that she has passed on the mantle of Batgirl and taken up the motif of the computer expert Oracle. Post-Crisis she had already retired from costumed heroics before being shot by the Joker in her home in The Killing Joke, paralyzing her from the waist down. Alan Moore intended for it to be a non-canon one-shot, but the story proved to be so influential that DC decided to adapt it into the mainstream continuity. John Ostrander's lauded Suicide Squad series then set her up with the Oracle role, with Ostrander's wife Kim Yale being instrumental in her progression. Babs later founded and lead the Birds of Prey and joined the JLA.

Incidentally, Barbara's identity as Oracle makes her far more influential and important in the DC universe than her role as Batgirl ever did. Of course, despite being primarily the brains of the Bat-family, she could still fight off anyone who's not a world-class martial arts expert, thanks to tutelage under Richard Dragon.

Barbara has returned to her role as Batgirl in the New 52, having regained the use of her legs due to physical therapy during the three years since the events of The Killing Joke, removing most of her time and accomplishments as Oracle in the previous continuity from canon.

From 1989 to 2011 Oracle was one of the most visible disabled heroes in comics, and the most visible one not to have a superpower or superpowered cybornetic implants that compensated for their disability. As she was widely considered a positive representation her relaunch as fully cured of her spinal injuries post-Flashpoint received a lot of backlash from fans. In the long term putting the Batgirl most known to the general population back in the uniform seems to be working out for DC, and has resulted in a fun upbeat book much like the Batgirl that was cancelled and removed from continuity for the reboot. However, the events of The Joker War sees Barbara step down as "Batgirl" and take up the "Oracle" identity again.

Oracle: The Cure provides examples of:

The Oracle Code provides examples of: