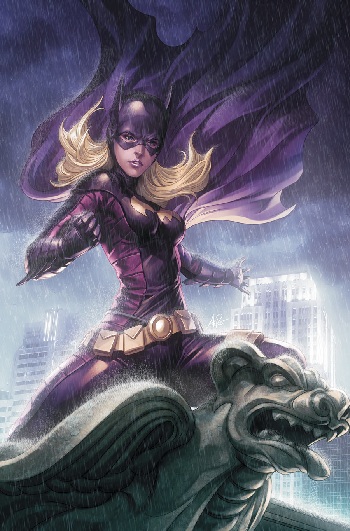 What, this? Oh, it's nothing, just my gargoyle. Why, don't you have one? note It's a grotesque. Gargoyles have water spouts.
"It's only the end if you want it to be."
Advertisement:

Batgirl was an ongoing monthly comic-book series written by Bryan Q. Miller. Running from 2009 to 2011, this series featured Stephanie Brown as Batgirl, the fourth person to bear the title ("officially", she's the third Batgirl, however), while she simultaneously attends Gotham University. This is the second ongoing series to be named after and feature the Batgirl character; the previous series focused on the preceding Batgirl, Cassandra Cain.

Stephanie Brown is the daughter of the Cluemaster, a member of Batman's rogues gallery, and she began operating as the masked vigilante "the Spoiler" when her father managed to abandon his habit of leaving clues to his crimes. Guest-starring in multiple Gotham-based series, Stephanie began a romantic relationship with Tim Drake (Robin) and formed a friendship with then-Batgirl Cassandra Cain. Eventually she assumed the Robin identity herself when Tim briefly rejected the costume, but her earnest efforts to help ended up instigating a massive gang war in Gotham and she was captured by Black Mask. In the original story she was killed by Black Mask, but a later retcon revealed that she survived her injuries and her death had been faked to smuggle her out of the country.

When it was decided to launch a new self-titled Batgirl series, the executives decided not to use the currently-existing Batgirl as its star. In the first issue, Cassandra Cain, who had worn the mantle since the Bat Family Crossover Batman: No Man's Land in the 1990s, retired as Batgirl in the wake of the death of Batman. Stephanie, who had an established friendship and even a pleasant working relationship with Cassandra, decided to use the costume and assume the mantle of Batgirl. Barbara Gordon, the original Batgirl, found out about this and at first tried to stop her, but after seeing a demonstration of her bravery vows to guide and help her. The series was Lighter and Softer than many of the other Bat-related titles being published by DC and is an embodiment of the Tropes Are Not Bad ideal: Its upright and cheerful protagonist still faces the same horrors and challenges facing any hero, but perseveres without ever losing her positive outlook.

The series ended in August 2011 with the New 52 Continuity Reboot of the DC Universe, after which a new Batgirl series was released featuring Barbara Gordon as the titular character. A one-shot featuring Stephanie Brown as Batgirl was published in Batman, Inc.: Leviathan Strikes, containing her planned Batman, Inc. crossover issues that were never published due to the reboot. Years later, Steph got some more closure (particularly regarding her on-off romance with Tim Drake) in a Convergence mini-series before her return in Batman Eternal where she became Spoiler again.

In DC Rebirth, Steph joins the cast of Detective Comics as part of a team (including Tim Drake, Cassandra Cain, and Clayface) being whipped into fighting shape by Batman and Batwoman in order to face a dangerous threat.

For the character page covering the Batgirl persona and the various women who have worn the identity, see Batgirl.